Meeting with Gerhard Stahl, Secretary General of the Committee of the Regions

On February 28, 2012, Gerhard Stahl, Secretary General of the Committee of the Regions, received the delegation of Council of Danube Cities and Regions formed by President Ivo Gönner, Lord Mayor of Ulm, Peter Langer, General Coordinator and Eric Bartha, Secretary General.
Being a promoter of the regional and local cooperation within the European Union, the Committee of the Regions underlines the role of macroregional strategies like the EU Strategy for the Danube Region where cooperation becomes closer, because thus we work together towards establishment, expansion, and development of an area, which is becoming bigger and bigger with regards to the EU. In the end, partnerships, exchanges of good practices, and work on mutual projects are the biggest benefits of the Danube Region and, implicitly for the European community. 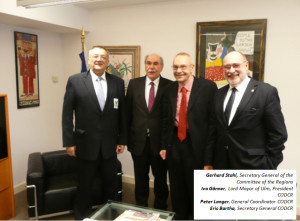 Following the recommendations of the European Commission to involve all the existing institutions, areas of activity and riparian countries in the implementation process of the  European Union Strategy for the Danube Region, the Council of Danube Cities and Regions is a bridge that links European, regional and local institutions to the academic, business, financing networks and other representatives of the civil society, in respect of the European fundamental principles: cooperation, territorial cohesion and subsidiarity.
CoR also points out that democracy and the rule of law are particularly important issues and that the Danube Strategy must support decentralisation and regional and local self-government, particularly in those countries that are not EU Member States.