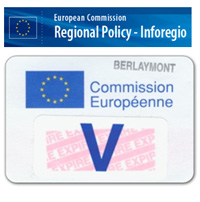 On February 28, 2012, Commissioner for Regional Policy Johannes Hahn received the delegation of Council of Danube Cities and Regions formed by President Ivo Gönner, Lord Mayor of Ulm, Peter Langer, General Coordinator and Eric Bartha, Secretary General.
The EU Strategy for the Danube Region has already enhanced cooperation and policy dialogues across the macro-region and its success depends on the implementation of the Action Plan. The European Commission stresses the need to strive for concrete results already in 2012. Starting with targets and the Action Plan, a very operational approach towards projects development is needed.
Discussions centered on the important progress that has been done so far concerning concrete actions for turning ideas into projects, funding opportunities, governance and communication. 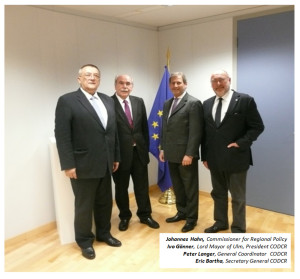 Road Show on the EUSDR and Participation in Danube Region was presented as a joint project developed by the Council of Danube Cities and Regions in partnership with the Foster Europe Foundation, the European Danube Academy and the Danube Civil Society Forum. The project aim is to create a modular, two-way alternating communication with the partners in the more rural areas along the Danube on the EUSDR, with the participation of leading representatives and institutions from the local and regional level, the civil society as well as from the cultural and education sector.